‘Coleraine to Galway’  – Songs for, from and about Ireland  October 2014 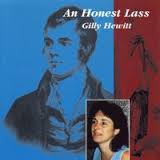 REVIEW FROM www.livingtradition.co.uk
GILLY HEWITT – Coleraine To Galway
Although growing up in Ayrshire, it’s been mostly in the Edinburgh area that Gilly’s built herself a solid reputation as a charismatic singer of both traditional and contemporary songs.Born of an Irish father and Scottish mother, Gilly has a well-turned sympathy with both traditions and she’s blessed with an attractive singing style, sweet-toned yet idiomatic, with an almost conversational ebb and flow and a forthright confidence in delivery that sometimes reminds me of Anna Shannon; it’s easy to understand her direct and long-standing appeal to audiences. She also has an ear for a good song and just how best to put it across; for instance, her unaccompanied rendition of the emigration song Edward Boyle is very persuasive. Where she accompanies herself here, it’s on the humble banjo (though in purely solo capacity on just the one song, Tommy Sands’ The Music Of Healing). Elsewhere throughout this CD she calls on the talents of Cathal McConnell (whistles and flute), Roddy Neilson and Mike Slessor (fiddles), Murray McLeod (guitar) and Ian Hewitt (bodhrán or guitar).
The disc’s well-appointed musical journey takes us from James McCurry’s jaunty Coleraine Regatta through to a nicely decorated a cappella Galway Shawl. Along the way Gilly puts her own stamp on a healthy mix of material. This embraces several not-so-well-known traditional songs (including Bonny Bonny, here done to a sparse drone, and Don’t Come Again, from the singing of Eddie Butcher) and some well-chosen, more contemporary fare including a thoughtful account of Tommy Sands’ inspirational Your Daughters And Your Sons, the ruminative early Kieran Halpin opus Port Of Call, and two clear repertoire classics (Song For Ireland and The Tinkerman’s Daughter). The disc’s only item of strictly non-Irish origin is Allan Johnston’s celebrated anthem The Shore Neath The Tide (which became adopted by Irish band Craobh Rua). It’s a most pleasing collection.
David Kidman