Played at the Festival Folk at the Oak on Friday 14th August with Roddy Neilson on fiddle. Ian Hewitt also accompanied on percussion and guitar, whilst Murray McLeod guested with guitar on one of the songs. 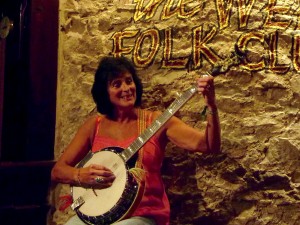 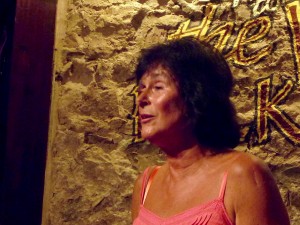 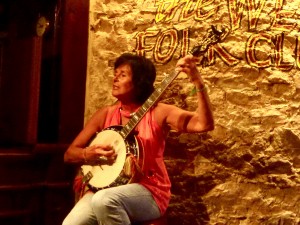 The Gilly Hewitt Band Leith Folk Club 26th January 2016
Growing up in Ayrshire Gilly was steeped in Robert Burns’ songs and poetry from an early age. It has been mostly in the Edinburgh area that she built herself a solid reputation as a charismatic singer of both traditional and contemporary songs. She recorded an album of 17 Burns’ songs (An Honest Lass) and has since gone on to produce two EPs each featuring six songs, followed by last year’s CD of songs for, from and about Ireland (Coleraine to Galway).
Last year’s album was launched at the Leith Folk Club towards the end of 2014. This gig on the 26th January will be in celebration of Burns’ birthday and will be totally concentrating on Robert Burns works.
‘Born of an Irish father and Scottish mother, Gilly has a well-turned sympathy with both traditions and she’s blessed with an attractive singing style,sweet toned yet idiomatic, with an almost conversational ebb and flow and a forthright confidence in delivery; it’s easy to understand her direct and long-standing appeal to audiences. She also has an ear for a good song and just how best to put it across.’ – Review from Living Tradition
She accompanies herself when appropriate, on a 5 string banjo, and has played at folk clubs and festivals around the UK including Sidmouth, Stainsby, Girvan and Moniaive. She has supported many well known singers and musicians including Dick Gaughan, Kieran Halpin and The Poozies. In the past she has been accompanied by Aidan O’Rourke, Cathal McConnell and Pete Clark among others.
This time the band will include Roddy Neilson on fiddle, Murray McLeod on guitar and Ian Hewitt on percussion. There may also be guest appearances on the night. Come along and enjoy an evening of Robert Burns.